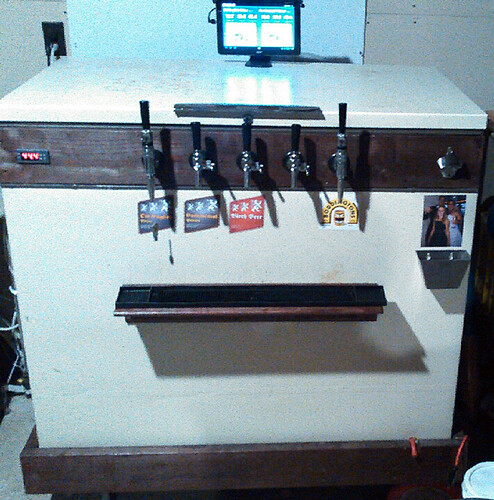 I built a lower frame for my Kegerator and put it on wheels so we can easily wheel it outside for summer parties. It also has the added benefit of allowing me to use a chain hoist I installed from a beam in my garage to lift heavy kegs with ease, I then simply wheel the kegerator under the suspended keg and lower it in with virtually no effort and no damage to the kegerator as the kegs are lowered slowly. 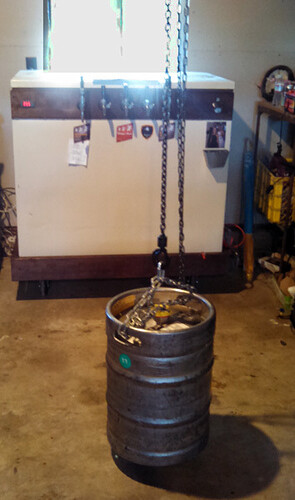 The Kegerator itself is built from a 16cuft freezer. I have 5 faucets on the kegerator itself, 3 are Perlick flow control taps running purely on CO2, at each end are two stout faucets which run on a beer gas blend of 70% Nitrogen/30% Co2. Inside the kegerator I have a CO2 tank, Nitro tank and a Perlick Gas Blender. In the pic, all red lines are CO2, all blue are Nitro. The CO2 faucets are fed from a secondary regulator setup so I can run different pressure on each keg, the Nitro mixed gas is fed into a manifold which feeds the 2 Stout taps on my kegerator. You can’t see it on these pics but the 3rd port of the manifold actually goes outside of my kegerator and feeds a 6th Stout faucet which is installed on my ‘cellar’ (Another freezer which I keep at 55 degrees) where I age my home brews and this last tap is used for serving both English ales and red wine at the warmer temperature. I have a nitro secondary regulator in the cellar for adjusting pressure for serving wine.
– UPDATE – The perlick gas blender turned out to be very problematic and inconsistent so I replaced it with a Mcdantim TM100 (75% Nitro, 25% CO2) which is attached to the back of the kegerator. It works MUCH better than the little perlick! 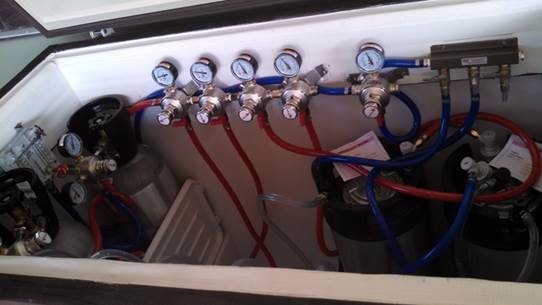 The mount for my kegbot tablet is attached with JB weld and the tablet remains attached when I open the kegerator.

On the back is an RV water pump with a ball lock male fitting on, I use this for cleaning my beer lines and faucets by filling a bucket with cleaner/santitizer, connecting the ball lock fitting that normally attaches to the keg and then allowing it to cycle for however long needed. I also use this pump for pushing iced water through my wort chiller when brewing and for pushing cleaner/sanitizer through my kegs so I don’t waste CO2. 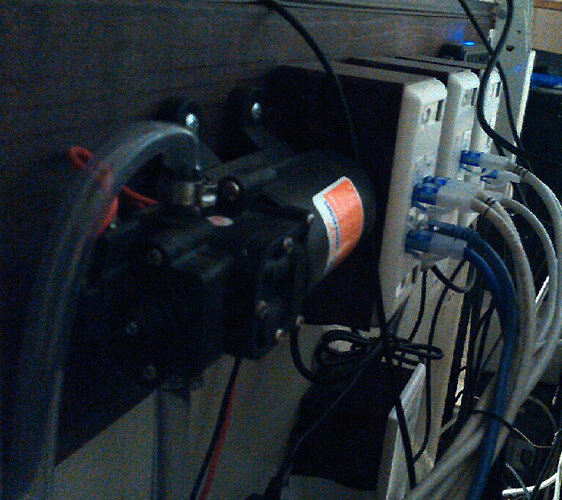 Also on the back are a series of electrical back boxes with RJ45 Jacks on - Inside these back boxes are all my KBPM’s, the jacks are used to break out the KBPM jack so I can attach 2 flow controllers to each one, temp probes and my I-button reader. The ibutton reader is on the side of my kegerator, highlighted with the red arrow. There is also a box which houses the relay for powering the solenoids I have on each beer line so no-one can pour without authenticating with an I-button 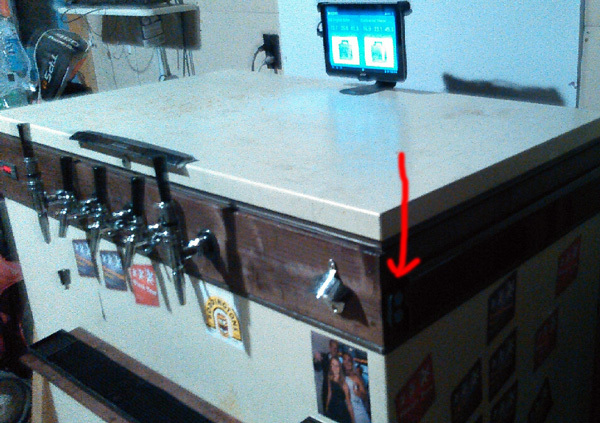 The beer labels under each faucet for showing what is on tap are just logo’s I printed onto magnetic paper and cut out so I can easily put the relevant one on when I change kegs.

Hot damn! I thought I was cool with my two keg kegbot system. You’ve taken things to a new level!

Thank You! It took a few months to get all the parts and build but friends & family all say it was worth the effort and I can’t disagree. Even the wife & kid like it as it serves wine & soda too… which, by the way was key to being allowed to build it

Awesome set up. How is the foam out of the solenoid? What solenoid did you use?

Thank You - I use these 12v solenoids from ebay at $21 each, safe for drinking water they say:

As for foam, it does create a bit but I have the flow control faucets so just slowing the pour down slightly makes it no problem and I can always pour a full glass with very little foam on top. It doesn’t affect the nitrogen taps at all but then again the beers I push with nitrogen are British ales and Stouts which have very little carbonation to begin with.

There are definitely much better solenoids for using with beer out there from what I’ve read on various forums (apparently the electronic closing ones are best but I have never tried one as they are a lot more expensive) but the ones I have work fine for me.

I have mine screwed directly onto the output of the flow sensor (so the beer goes into the flow sensor first, then into the solenoid valve before getting to the faucet) and they work well enough with such little foam I have no plans to replace them with more expensive ones. It may be necessary to use more expensive valves if you don’t have flow control faucets but I don’t have any without so I can’t test for you I’m afraid.

Congratulations for your project. I liked so much! I’m planning to make a similar project and buy these valves. Do you know what is the pressure on your beer line? My question is because the manufacturer of these valves said that it works with a minimum pressure of 5 psi and as far I know the pressure on beer lines is usually 2,5 psi.