How to build now that store is closed?

I’ve just learned about Kegbot, but they have stopped producing the the equipment. I’ve researched a little about building my own through an Arduino or Rasberry Pi. What recommendations do you have for someone with good general computer skills, but very limited programming skills?

You don’t really need any programming skills. If you can follow the directions in the documents, you’ll be fine.

I think my plan is to go with the kegberry. It seems the easiest. However, the flowmeters are not sold anymore. Is there a way to buy a different flowmeter and hook it directly to the rasberry pi? Or would I have to build a kegboard by using an arduino?

I know you can source that (or a different) flowmeter from another site. I personally use the swissflow sf800 meter. http://www.swissflow.com/sf800.html
Pretty pricey especially after you factor in shipping. However, I’ve been using these same meters for several years and in several different kegerators. The quality is top notch. The SF800 used to be the normal kegobt flowmeter, but changed to the GEMS FT-330 due to cost.

However, I don’t know what you’d need to do to attach it to the raspi. I know kegberry doesn’t support flow sensing via GPIO. The project is set up to go from flow sensor > KegBoard Pro Mini > Raspberry Pi. Since the KBPM isn’t made anymore, I assume you have to go the arduino route. I’m also not sure where you’d get the kegbot arduino shield or coaster from. 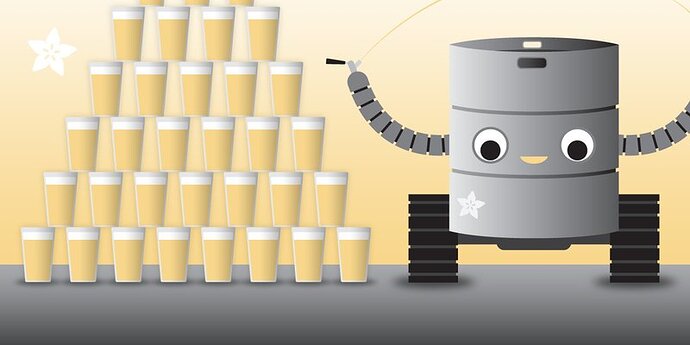 Team Adafruit is augmenting our kegerator to talk to the internet. More features being added every week!

Can you tell how they attached their flowmmeter straight to the raspi? As in this picture: 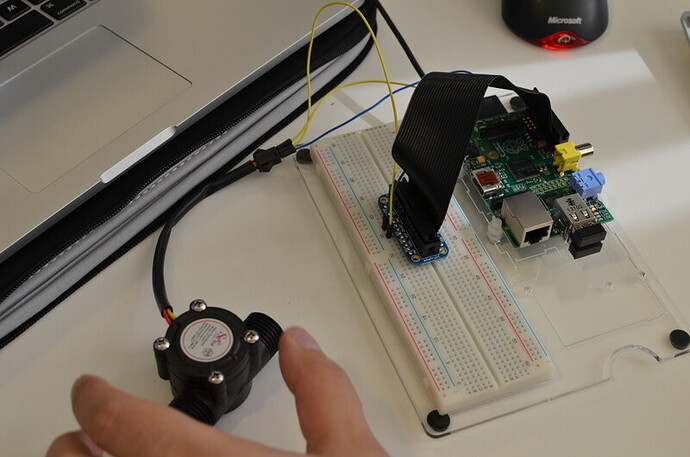 I got lost when they get to the coding part. But I’m not really interested in the Twitter feature.

I see this is an old topic. I have tried (and have even paid for a kid) but never received it. With that I have made peace. However I still don’t have a kid and since the store are closed I feel stuck.

Do anyone have the patience to give me some advice… I will get a Rasberry pie, I will even get someone who knows how to do programming or build circuits if that required.

The forum and website docs will be your friend. Setting up with the store closed is very possible and not too complicated if you’re willing to do a little reading. I’d suggest posting a new topic with your build questions.

If you are going to go the Raspberry Pi route, just pick up a new Pi. I wouldn’t suggest downloading the pre-built image, I’d download the stock Raspbian image, run sudo apt-get update, sudo apt, get upgrade, and sudo rpi-update. Once that is done run the install script and your server will be set up.

Once your server is set up, get a tablet and a USB OTG cable. Buy an Arduino Leonardo or Uno and you can flash the kegbot firmware to it, then you just need to plug in your flow meters and/or relays that you want to use. Plug the Arduino into the tablet via USB, load the app, and you’re good to go.

As I said - the forum and website have a lot of specifics on getting this all set up but if you have questions fire up a thread.

Is the Raspberry Pi even needed? If it’s just running the server, you don’t really need a server. And if you wanted to run with a server, just run it on the Android tablet instead.

Just trying to save Gerrit some time/effort. The bare minimum is

Well, no, it’s not really needed. It all depends on what he wants. There are advantages and disadvantages to both methods. Without a doubt doing it right on a tablet is less pieces and parts and less expensive. From the looks of the documentation setting it up on a tablet, the Pi is probably a little more straightforward of an initial config.

My personal preference is to use a Pi. I don’t want the data to be locked on the Android tablet and I do a lot of other things with the Pi that I wouldn’t be able to do running it directly on the tablet. I’m using the Pi as a WiFi hotspot/repeater to connect to a public WiFi with a portal at a campground and broadcast its’ own secured network. Because of the internet portal I’m also running Postfix so my mail can queue when it doesn’t have an active internet connection. I have the camera module on it recording motion in the shed where the kegerator is set up. I realize for most people they don’t have their kegerator sitting in a public place and most of this isn’t necessary…but it really comes down to personal preference and what you’re hoping to do with it.