This will be the thread disclosing information about my kegbot build. Stay tuned for more information.

Hello, and welcome to “My Kegbot Story” thread. This is unofficial thread documenting the story of my kegbot. First off who am I, I’m known as ipatch on the kegbot forums, and a.k.a. capin on the IRC channel #kegbot on the freenode.net network. I don’t remember when exactly I heard about the kegbot idea, but I’ve been hanging out on the forums and IRC channel for a couple of years now.

The kegbot idea really grabbed my attention when I began homebrewing. Basically, I purchased all the equipment to start all-grain brewing along with the kegerator and kegs from a guy in the local area. After brewing several batches of homebrew and realizing my friends and roommates were drinking the majority of my homebrew but weren’t chipping in to the process of making the beer or donating funds to help support the cause I decided to take action into my own hands.

So I decided to build a kegbot, that way if people wanted to drink homebrew or whatever commercial beer I have on tap they could contribute to the cause in a fair way. While planning out the build I soon realized a dedicated computer would be necessary to complete the kegbot software side of things, which is something I wasn’t too keen on. I also wanted a feature where people could not pour beer from the kegerator without logging in. Moreover, I just didn’t want a feature where users would login to pour beer, I wanted a feature where a user would have a credit / token to pour a beer from the kegerator, which would require having a feature where an admin user would issue credits to the users of the kegerator. I talked to Mikey on IRC several times about getting these features built into the software, but it didn’t seem too high on his priority list, thus spawning the birth of KegCop.

I have never written a iOS application before, much less one that communicates with a microcontroller, but I knew what I wanted, and I have high speed internet

Several months of development turned into a year, and year soon became a couple. When I first introduced KegCop it was running on an iPhone 3GS and was communicating with Arduino microcontroller via the serial port built into the 30 pin dock connector. Soon thereafter, I upgraded to an iPod Touch which had Bluetooth Low Energy 4.0 and found a compatible microcontroller that would communicate to the iPod Touch via BTLE.

The project is far from being complete, as iOS 8 introduces a new language called Swift which I would eventually like to refactor the code base to support, and building out a web frontend which users can manage their accounts via their own phones is also a feature I would like to see hashed out.

In the end, I have learned a lot about beer, software development, and have made some friends and enemies in the process. I know KegCop isn’t as feature rich as the Android software developed by Mikey, but at least I know the beer is safe, and people are contributing to the cause in a fair way.

Does this require your device to be jail broken?

Yes, it does require your device to be jailbroken. I haven’t had time to take out the jailbreak code out of the app to release a version that is compatible with the App Store, …but stay tuned.

Looking forward to it.

No seriously release it already

Continuing the discussion from My Kegbot story:

No seriously release it already

well will have to wait and see now. 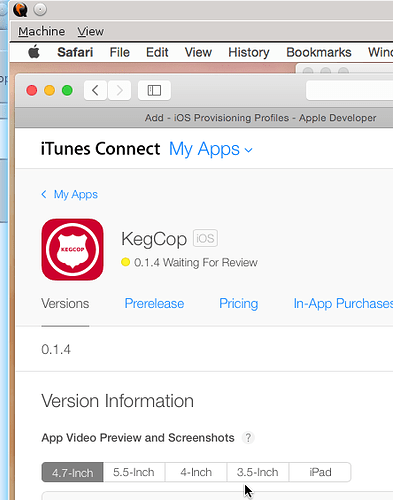